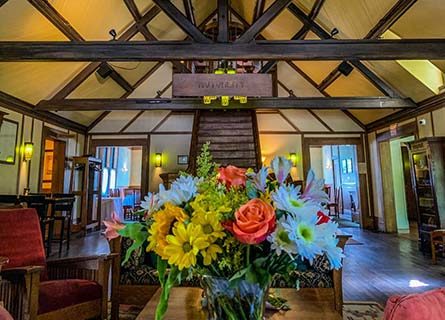 Make your way to the historic Roycroft Inn in East Aurora, New York. In the afternoon, meet your Frank Lloyd Wright Trust trip leaders and fellow guests in the lobby. Depart the hotel on foot for an in-depth tour of the Roycroft campus by Program Director Alan Nowicki. The tour ends at the Elbert Hubbard Roycroft Museum, where you will have time to view the home and its excellent, finely crafted collection at leisure. Tonight, get to know your fellow travelers at a festive welcome dinner.
The Roycroft Inn |  Dinner 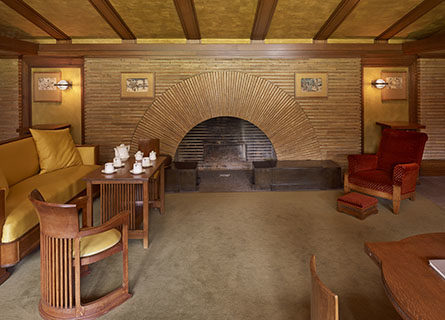 After breakfast, depart for a full day of sightseeing. Join Architectural historian Martin Wachadlo for an overview of downtown Buffalo’s architectural riches, including Louis Sullivan’s magnificent Guaranty Building and Ellicott Square by Daniel Burnham. Lunch is at the Fontana Boathouse, constructed in 2007 on the shores of the Niagara River according to Wright’s 1905 design (considered to be a prototype for Wright’s iconic Robie house in Chicago) and 1930 revision. Then, stop at the historic H.H. Richardson Complex. End the day with an in-depth, curator-led tour of Frank Lloyd Wright’s Prairie-style masterpiece, the Darwin Martin Complex (1903-1905) with curator Susana Tejada. The unique design, which includes the main house, Barton residence, gardener’s cottage, a carriage house, and a conservatory, has been restored to its former glory: A bold expression of Wright’s powerful vision for a new American architecture. The tour ends with a private wine and cheese reception on the veranda overlooking the recently installed Floricycle designed by Walter Burley Griffin. Return to the hotel. The evening is at leisure to enjoy East Aurora’s restaurants in the quaint downtown area, just steps from the inn.
The Roycroft Inn | Breakfast, Lunch 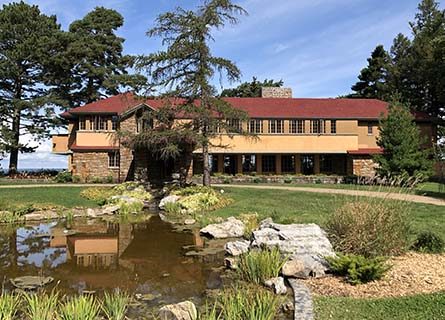 Depart the hotel to take an in-depth VIP tour of Graycliff―the summer estate Frank Lloyd Wright designed for the Darwin Martin family―with architect and Wright scholar Pat Mahoney. Built between 1926-27 on a 70-foot cliff overlooking Lake Erie, Graycliff represents a transition between Wright’s Prairie style and his later work in concrete, such as Fallingwater. After lunch, see more of Buffalo—including exterior visits to the William Heath House (1904-1905) and the Walter V. Davidson House (1908), located in a historic section of Buffalo designed by Frederick Law Olmsted. Return to East Aurora. Savor our final evening at the Roycroft Inn with cocktails in the lounge, followed by dinner in its beautiful library.
The Roycroft Inn | Breakfast, Lunch, Dinner

Check out of the hotel to enjoy a private, closed-day tour of the Pierce-Arrow Museum to see the Wright-designed Tydol gas station, plus an extensive collection of historic automobiles with owner Jim Sandoro and architect Pat Mahoney. Our journey concludes with a transfer to the Buffalo Niagara airport. (Estimated arrival: 12:30 pm)
Breakfas