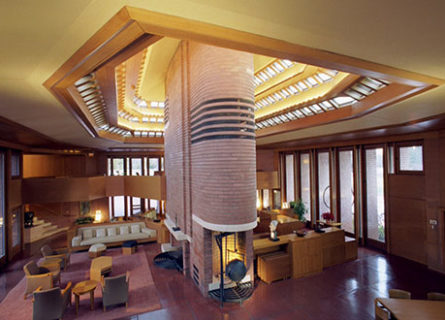 Arrive in Chicago and check in with us at the Rookery Building to start our journey north. Drive along the shores of beautiful Lake Michigan to Racine, an industrial city on the lake. Upon arrival, tour the landmark S.C. Johnson Complex, including the Administration Building (1936), celebrated as one of the top 25 buildings of the twentieth century. Its iconic Great Workroom—with its spacious expanse made possible by dramatic columns resembling lily pads—is an engineering marvel, made possible only by Wright’s bold vision and H.F. Johnson’s faith in his architect’s genius: The original construction cost of $200,000 kept rising, finally ending at $900,000. “First, Frank Lloyd Wright was working for me,” Johnson recounted, “Then we were working together. Finally, I was working for him.” Despite budgetary and technical difficulties, Johnson hired Wright to design the neighboring Research Tower (1944). The resulting complex—with its many design innovations—not only fulfilled Johnson’s goal of building “the best office building in the world,” but fundamentally changed the face of work.

Depart the S.C. Johnson Complex for Wingspread and stop at the Thomas P. Hardy House (1905) on the way. After viewing the exterior of the home, continue and arrive at Wingspread, now a retreat and executive conference center, as well as a National Historic Landmark. Settle into your guest room before gathering in the evening with your fellow travelers during our welcome dinner. The entire complex—including the house and the wooded grounds—is reserved just for you.
Wingspread D 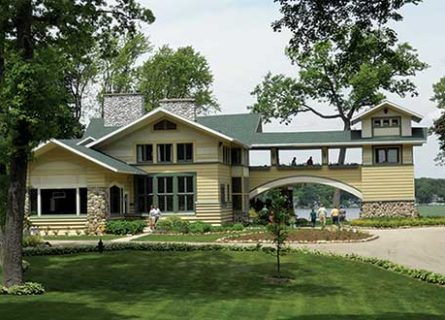 After breakfast in the dining room, enjoy a private in-depth, special access tour of Wingspread.  Wright designed the private home for the H.F. Johnson family in 1937 and considered it to be the last of his Prairie houses. Based on the shape of a pinwheel, the living spaces expand from a central 3-story tall Octagonal Grand Hall. The sumptuous and meticulously crafted home also features four fireplaces, a Crow’s Nest and a Juliet balcony. After lunch, depart for Madison, stopping at the privately-owned Penwern estate—designed by Wright in 1900 on the shores of Lake Delevan—along the way. Continue to Madison, Wisconsin’s lively political and educational hub. This hilly metropolis enjoys an idyllic setting on a narrow isthmus between Lakes Monona and Mendota. Your evening is at leisure to enjoy this college town’s wide variety of dining and entertainment options, all located within walking distance of our centrally located hotel.
Hilton Madison Monona Terrace B L 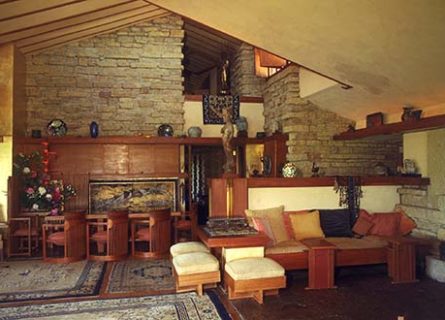 After breakfast on your own, take a private tour of Monona Terrace, which is conveniently attached to our hotel via walkway. Now a convention center and considered to be the cultural heart of the city, as well as a symbol of Madison, it was designed by Frank Lloyd Wright in 1938 but took 60 years to build, finally opening its doors in July 1997. After lunch on your own, depart the hotel for a tour of the Unitarian Meeting House, complete in 1951 in Wright’s Usonian style. The single story open-plan structure features wide, overhanging eaves, large fireplaces, and a south-facing, soaring wood and glass “prow.”  Next, head for Taliesin, located in the beautiful Wisconsin River valley. Considered to be the most personal of Wright’s masterpieces, it serves as a laboratory for organic architecture, with designs from nearly every decade of his life. Our exclusive and extensive tour includes buildings that Wright designed and modified from 1897 to 1959, including the Romeo & Juliet Windmill, Hillside School, Tan-y-Deri, Midway Barn, and the Frank Lloyd Wright Visitors Center. As the sun sets over the peaceful valley below, toast an end to our adventure with a private dinner on-site. Savor the opportunity to see the main house—a UNESCO World Heritage Site— in the changing light, as the numerous eaves cast changing shadows on the limestone and plaster walls, and the windows impart an amber glow.
Hilton Madison Monona Terrace D

After breakfast on your own, check out of the hotel. We bid farewell to Madison with a photo stop at the Jacobs 1 House, considered to be Wright’s first Usonian House, built in 1936 for Herbert Jacobs and his wife Katherine. Continuing south, we will stop at O’Hare airport before returning to the Rookery Building in downtown Chicago. A box lunch will be provided on the bus.
L