Travel from your gateway overnight to Tokyo.

Upon arrival, transfer to the Imperial Hotel, located in the sophisticated Hibiya neighborhood, on the border of Ginza—Tokyo’s shopping and dining epicenter—and within walking distance of the Imperial Palace. Meet Frank Lloyd Wright Trust Travel Manager and tour director Risa Sekiguchi (a Japanese native) and join your fellow tour members for a welcome dinner and drinks at one of the hotel’s fine restaurants. Relax and enjoy the glamorous décor and contemporary Japanese fare—which incorporates ingredients and influences from the West—while getting to know one another.
Imperial Tokyo | Dinner 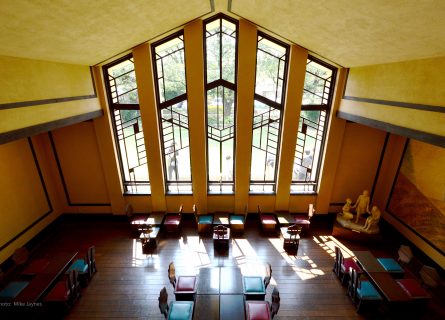 After breakfast, explore Tokyo—a provocative mix of traditional and contemporary Japanese culture. Learn about the history of the former Imperial Hotel, Wright’s most important Japanese project, including the atmospheric Old Imperial Bar, which features several significant pieces from the original structure. Then, board a bus for a lecture on Frank Lloyd Wright and his trusted Japanese apprentice, Arata Endo, followed by an in-depth tour of their joint project, the Jiyu Gakuen (Freedom School) complex. This post-Prairie design embodies Wright’s vision of progressive education. The school was founded in 1921 as a middle school for girls by Motoko and Yoshikazu Hani, whose dream it was to create a place where children could learn to think for themselves. To accommodate a limited budget, the beautiful design makes use of humble materials in ingenious ways. Savor lunch amid a glorious Japanese garden before continuing to the Tokyo Metropolitan Teien Art Museum, housed in a former Imperial villa in a delightful high Art Deco style that combines the best of French and Japanese motifs. Return to the hotel for an evening at leisure. Choose from one of the excellent restaurants within the hotel itself or venture out for an exploration of Tokyo’s world-class cuisine.
Imperial Hotel | Breakfast, Lunch 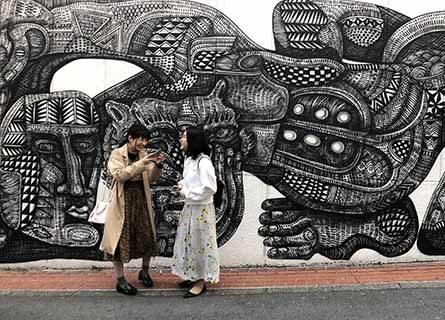 Continue your exploration of Tokyo. Visit Meiji Shrine to experience a blessing by a Shinto priest. This peaceful oasis of calm is just a few blocks from the epicenter of contemporary Japanese fashion and teenage culture: The trendy Harajuku neighborhood. After lunch, visit the Ota Ukiyo-e (Japanese print) Museum and learn about Wright’s career as an art dealer and his obsession with what was once a common art form. Stroll along architecturally-rich Omotesando, arriving at the Nezu Museum, rebuilt in 2009 by Kengo Kuma. Enjoy the museum’s important collection of traditional Japanese art—as well as its exquisite Japanese garden—before returning to the hotel. The evening is at leisure.
Imperial Hotel | Breakfast, Lunch 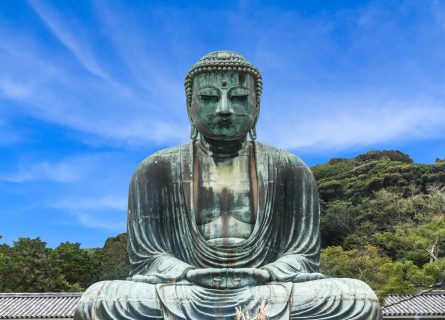 After breakfast, travel overland to Kamakura, once the seat of the Shogunate from 1192-1333 and now a picturesque resort town by the sea. See the Kamakura Great Buddha, where Wright sat for a portrait in 1919. Next, travel to Hayama (another charming sea-side resort town) for an exclusive visit to the privately-owned Kachi Villa, built in 1928 by Arata Endo. The sprawling villa―which retains much of the original furnishings―is the architect’s most important existing residential building. After lunch, continue to Hakone, a hot spring resort area popularized by Japan’s first Western arrivals. Take a boat ride on Lake Ashi and climb aboard a cable car for a dramatic view (weather permitting) of iconic Mt. Fuji. Then, check in at one of a traditional ryokan (Japanese style hotel) to sample refined Japanese living at its best. Don a traditional yukata (cotton kimono) for a stroll along garden paths and soak in one of the many onsen (hot springs), whose mineral-laden waters have numerous health benefits. In the evening, artful kaiseki (multi-course banquet meal) is prepared by an award-winning chef.
Hotel Kowakien Ten-yu | Breakfast, Lunch, Dinner 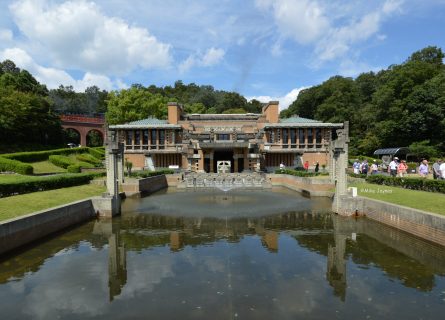 After a traditional Japanese breakfast (and perhaps another onsen soak), travel to nearby Odawara station to board the shinkansen (bullet train) to Nagoya, enjoying first-class comfort. Board a bus and leave the city limits to see the preserved lobby portion of Wright’s Imperial Hotel at Meiji Village, a 250-acre open-air architectural museum of over 70 buildings, including homes, factories, businesses and churches. Learn how the lobby was saved and rebuilt here and how Wright’s innovative and radical design contrasted with the earlier Meiji style. You will have time to have lunch and explore the park on your own. Return to Nagoya, where your evening is at leisure. Our 5-star hotel is located in the Nagoya station building, which features a wide array of shopping and dining choices.
Nagoya Marriott Associa Hotel | Breakfast 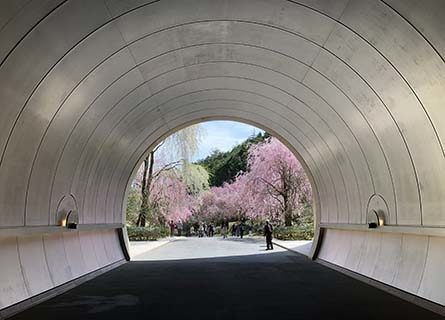 Travel overland through scenic rural vistas to the I.M. Pei-designed Miho Museum, hidden deep within a nature preserve in Shigaraki. The ambitious 1996 project was designed to assimilate the buildings—80% are located underground—to blend with nature. After lunch, continue to Kyoto, the heart of traditional Japanese culture and our home for the next four nights. This elegant city was once home to the Imperial family and was Japan’s capital from 794-1869. Here, Wright absorbed traditional Japanese culture and aesthetics, which remained with him for the remainder of his career. After lunch in a traditional machiya (Kyoto townhouse), stroll along the Shirakawa canal. Then, enjoy a private tour of the Sumiya Motenashi Art Museum to see the “floating world” of the 18th century Ukiyo-e come alive in this well-preserved Edo-era ageya (banquet hall). After checking into our hotel for a well-deserved rest, venture out to explore Kyoto’s dining and nightlife located just steps from the hotel.
Kyoto Hotel Okura | Breakfast, Lunch 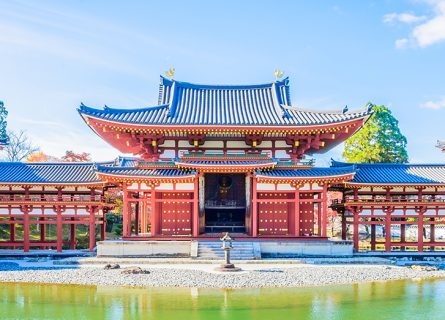 Depart for a full-day excursion to Nara, Japan’s first capital. On the way, stop in Uji—a famous tea growing region—to see Byodo-in, first built as a rural villa in 998 and converted to a temple in 1052. Its exquisite Ho-o-do (Phoenix Hall) served as the model for the Ho-o-den Pavilion that enchanted Wright at the World’s Columbian Exposition in 1893. Continue to Nara for a stroll through Deer Park before seeing the early 8th-century Great Buddha at Todai-ji Temple’s main hall. After lunch, travel to Oyamazaki City to see Chochikukyo, an eco-friendly house designed and built in 1928 by architect Koji Fujii for his own use. Fujii, who was influenced by C.R. Mackintosh as well as Wright, created a design that artfully blends traditional Japanese and modern elements. Return to Kyoto. In the evening, enjoy a casual group dinner in a restored machiya (traditional Japanese house).
Kyoto Hotel Okura | Breakfast, Lunch, Dinner 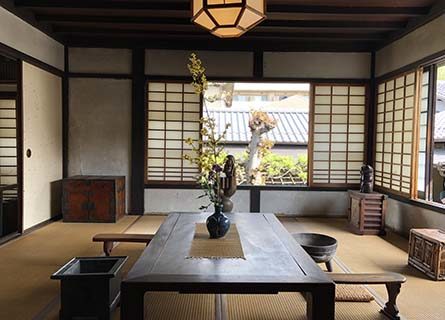 Wake early for a full day’s exploration of gardens, Buddhism and more. Take in the Zen aesthetic of “less is more” at Ryoan-ji and Daitoku-ji temples, home to some of the most important karesunai (dry landscape) gardens and austere teahouses in Kyoto. Many of Wright’s spatial design principles—as well as tenets of classic Japanese architecture—are evident here. After a temple-style vegetarian lunch within Daitoku-ji’s grounds, visit the Memorial Hall of Kawai Kanjiro, the home and studio of the potter who served as a central figure in the Mingei (folk craft) movement, a close ally of the Arts & Crafts movement. Your evening is at leisure.
Kyoto Hotel Okura | Breakfast, Lunch 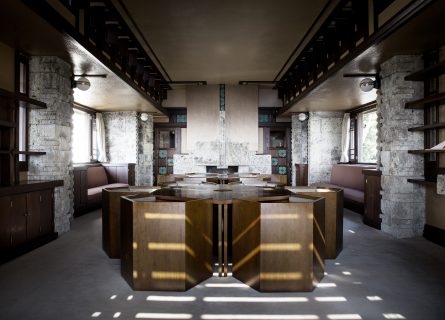 Travel by bus to Osaka for an exclusive tour of Arata Endo’s magnificent Koshien Hotel (1930). Here you can see influences from Wright’s Imperial Hotel and Midway Gardens. Then continue to Kobe to sample meltingly-soft Kobe beef before traveling to nearby Ashiya. Here, we experience Wright’s Yamamura House, built into a hillside overlooking the port of Kobe. Designed by Wright in 1918 and constructed in 1924 by Endo after Wright left Japan, the sprawling, 4,000-square-foot, four-level house bears several similarities to Wright’s Hollyhock House, yet has many features that are distinctively Endo’s. We have special permission to visit the house when it is closed to the public. Return to Kyoto.
Kyoto Hotel Okura | Breakfast, Lunch

Further explore Kyoto’s cultural riches on your own, with our list of recommendations and helpful tips. The city is easy to navigate and eminently walkable. Discover the galleries, boutiques and restaurants that are artfully housed along its machiya (traditional townhouse)-lined streets. Among the choices that await you are iconic temples and gardens, a Japanese cooking lesson and some of Japan’s best shopping for traditional crafts such as ceramics, textiles and basketry. Your trip leaders will be glad to provide suggestions and information. Gather in the evening for our farewell dinner and toast the end of your great adventure.
Kyoto Hotel Okura | Breakfast, Dinner

The morning is at leisure until our transfers to Itami airport and Kansai International Airport.