Amsterdam and the Avant-Garde

Depart the USA for your overnight flight to Amsterdam. 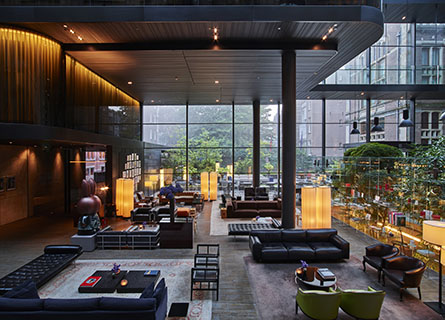 Arrive in Amsterdam and make your way to our 5-star luxury hotel in the Museum Quarter. In the afternoon, meet lecturer Frans Henk Hoekstra, your fellow travelers and Frank Lloyd Wright Trust tour leaders, and depart for a guided “highlights” tour of the world-famous Rijksmuseum. Here we can start to gain an understanding of Holland’s illustrious past. In the evening, get to know your fellow travelers over cocktails and a welcome dinner.
Conservatorium Hotel, Amsterdam | Dinner 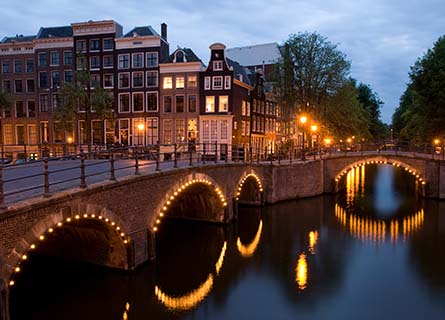 After breakfast at the hotel, depart for a full day tour of central Amsterdam. We start on foot and by boat along Amsterdam’s Seventeenth-Century Canal Ring , a UNESCO World Heritage site, in order to gain an understanding of this luminous city. Highlights include the Beurs van Berlage (Amsterdam Commodities Exchange) by Hendrik Petrus Berlage; De Bazel, a monumental building in the Brick Expressionist Style; and what is considered the first great monument of the Amsterdam school, Scheepvaarthuis (‘The Shipping House’). This impressive, fortress-like waterfront building—now a hotel—was once home to several shipping companies. The design was led by Joan van der Mey in collaboration with Michel de Klerk and Piet Kramer, who were influenced by Louis Sullivan’s urban towers, as well as Frank Lloyd Wright’s lavish, Asian-inspired geometric ornament. After lunch, transfer by bus to Het Schip, “The Ship”, so nicknamed due to its nautical shape, designed in 1917-21 by Michel de Klerk as a social housing complex. Return to the hotel for an evening at leisure. The neighborhood boasts dozens of casual and fine dining options within walking distance of the hotel.
Conservatorium Hotel, Amsterdam | Breakfast, Lunch 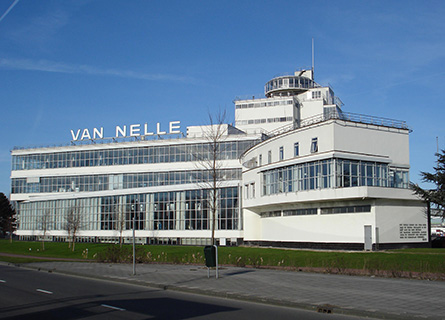 After breakfast, depart for Rotterdam, a city in stark contrast to Amsterdam that is known for its modern and contemporary architecture. Enjoy private tours of Villa Sonneveld (1929-33) and the UNESCO-listed Van Nelle Factory/fabriek, both designed by architecture firm Brinkman & Van der Vlugt, (1929-33). Compare and contrast two icons of Functionalism; one private, one public. Also see works by J. J. P. Oud such as the Café de Unie (1925). Oud wrote about Wright’s Robie House in the De Stijl Magazine. Return to Amsterdam for an evening at leisure.
Conservatorium Hotel, Amsterdam | Breakfast, Lunch

Depart Amsterdam for a day trip to Hilversum and Utrecht. Enjoy an interior tour of Raadhuis (Hilversum Town Hall) (1928-31) considered to be the finest work of William Marinus Dudok. The modernist building clearly shows the strong influence of Frank Lloyd Wright. Next, tour the estate Zonnestraal, (1925-31) a former sanatorium by Jan Duiker, Bernard Bijvoet and Jan Gerko Wiebenga—an early Functionalist building. In Utrecht, tour the Rietveld Schröder House built in 1924 by Gerrit Rietveld according to the principles of De Stijl. In 2000 it was listed as a UNESCO World Heritage Site. If time permits, visit the Central Post office by Joseph Crouwel Jr., (1917-24). Return to Amsterdam for an evening at leisure.
Conservatorium Hotel, Amsterdam | Breakfast, Lunch 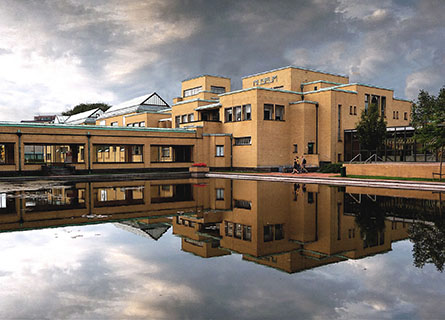 Today we explore Den Haag (The Hague). Visit the Kunstmuseum Den Haag by Hendrik Petrus Berlage, who was influenced by the Neo-Romanesque brickwork architecture of Henry Hobson Richardson. A visit Berlage made to the U.S. in 1911 greatly affected his architecture. From then on, the organic architecture of Frank Lloyd Wright became a significant influence. The museum also features a splendid collection of modern art. In the afternoon, visit Mauritshuis, an art museum featuring Dutch 17th Century Paintings by Vermeer (Girl with a Pearl Earring, View of Delft) and Rembrandt. Return to Amsterdam for an evening at leisure.
Conservatorium Hotel, Amsterdam | Breakfast, Lunch

After breakfast, transfer to De Hoge Veluwe, a national park in the middle of the country, to see several important buildings and collections, including Kröller Müller Museum by Henry van de Velde, which boasts a superb 20th century art collection and a beautiful sculpture garden. Also tour Jachtuis Sint Hubertus, designed and built by H.P. Berlage from 1915 to 1920. The splendid complex was restored to its former glory in 2012-2014. Return to Amsterdam. In the evening, enjoy a farewell dinner to toast the end of our journey.
Conservatorium Hotel, Amsterdam | Breakfast, Dinner

Our program ends after breakfast. Transfers can be arranged upon request.
Breakfast